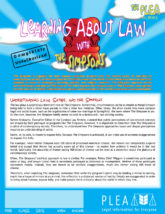 Learning More About Law with The Simpsons

Cartoons don’t have any deep meaning. They’re just stupid drawings that give you a cheap laugh.

While this issue of The PLEA has touched upon some instances of how The Simpsons can be used to learn about law, it by no means has covered all of the program’s law-related themes. Just a few other episodes dealing with law include:

The fallout of a three-eyed fish being caught downstream from the Springfield Nuclear Power Plant results in Mr. Burns running for governor, in order to change environmental regulations. This episode can be used to consider environmental law and the democratic process.

“The Last Exit to Springfield” - Season 4

A general strike takes place at the Springfield Nuclear Power Plant, pitting Mr. Burns against the union. This episode can be useful for considering labour law.

“Homer vs. The Eighteenth Amendment” - Season 8

A prohibition law in Springfield results in Homer selling home-brewed alcohol. This episode demonstrates what may happen when laws are contrary to the moral compass of a community.

While house-sitting for Mr. Burns, Homer takes Burns’ yacht into international waters, where he believes “anything goes.” This episode brings awareness to some issues surrounding international law.

There are many more Simpsons episodes that delve into the law, and integrating them into law-related education can have merit. In fact, several studies have indicated that The Simpsons can be used as an effective learning tool. Just keep in mind that television programs are copyrighted material and permission is required before playing episodes in classrooms.