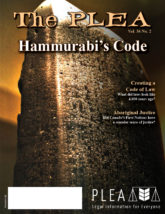 Hammurabi and the Creation of a Code of Law

For there to be justice, society needs to know what the laws are. King Hammurabi of Babylon is believed to be the first ruler who put laws on public display for all to see.

In the fertile plain between Iraq’s Tigris and Euphrates Rivers once existed Babylon. Founded some time before 2300 BCE, Babylon grew to be the largest city in the world under King Hammurabi’s rule from 1792-1750 BCE. Hammurabi (1810-1750 BCE) inherited power from his father, becoming Babylon’s sixth and most-famous ruler.

Despite having lived nearly 4,000 years ago, a surprising amount is known about Hammurabi and his rule. This is due to such archeological discoveries as the Mari Archives, a store of thousands of tablets in eastern Syria on the edge of what became the Babylonian empire.

The Babylon that Hammurabi inherited was a city that prioritized fortification over expansion. Hammurabi changed this. While he still continued to fortify Babylon, in his first ten years of power Hammurabi oversaw the construction of canals, irrigation systems, and places of worship. As well, he spread Babylon’s wealth amongst its citizens. With success in Babylon, Hammurabi then used both diplomacy and war to expand the boundaries of his empire. By Hammurabi’s thirtieth year in power, much of Mesopotamia was under his control. This greater empire is sometimes called Babylonia. Hammurabi’s final years were marked by considerable efforts in rebuilding the areas and peoples shattered by the preceding wars and conquests.

Even though Hammurabi was an accomplished ruler, like all humans he was not perfect. Correspondence and interviews unearthed in the Mari Archives showed that Hammurabi’s personality was sometimes less expansive than his empire. He had turning moods and could harbour suspicions of his allies, just as they sometimes harboured suspicions of him.

Nevertheless historians universally agree that Hammurabi should be best-remembered as a champion of justice. The most important testament to this is Hammurabi’s Code: late in his rule Hammurabi assembled the laws of Babylonia into one legal code, had it carved into stone, and put it on display for all to see.

The Writing of Hammurabi’s Code

Hammurabi’s Code is carved into a cylindrical slab of black basalt, often called a stele. Measuring 2.25 metres high and 65 centimetres wide, the laws on the stele are believed to be the ones that governed ancient Babylonia. It was unearthed by French archaeologists over the winter of 1901/1902. Because the Code makes reference to cities that were not part of Babylonia until Hammurabi’s thirty-first year in power and because the Code references Hammurabi’s advanced age, the Code was written late into his rule.

The stele can be divided into four major sections:

The sculpture and writing suggests that Hammurabi received laws (or received the right to create laws) from Shamash, the sun god.

However, reality was not quite that simple. Hammurabi was involved in legal proceedings across his domain, conducting extensive correspondence with judges and acting as Babylonia’s highest judge. Many of the decisions that were made by Hammurabi and his judges formed the primary source of his Code.

Even so, these judgments were not made merely on Hammurabi’s whim. Decisions were often informed by earlier law codes, including the Code of Ur-Nammu (c. 2100 BCE) and the Code of Lipit-Ishtar of Isin (c. 1860 BCE). Thus, Hammurabi’s Code was not so much a divine hand-me-down as it was a product of a developing system of justice. Its laws were often built upon legal systems and traditions untold generations earlier.

Regardless of where the laws for Hammurabi’s Code came from, the Code tells us that Hammurabi believed that the gods placed him in power to create a justice system that would prevent the strong from oppressing the weak. And the stele was not the only attestation of this. When buildings were constructed in Babylonia, it was common for Hammurabi to commission inscriptions on these buildings that explained how the gods chose him leader and how he believed in justice. Further evidence of Hammurabi’s dedication to justice comes from the names of the years of his rule. At the time, years were not recorded by numbers but instead by major events. The years of Hammurabi’s Rule are peppered with names such as “established justice in his land” (first year) and “statue of Hammurabi, King of Justice” (twenty-second year). 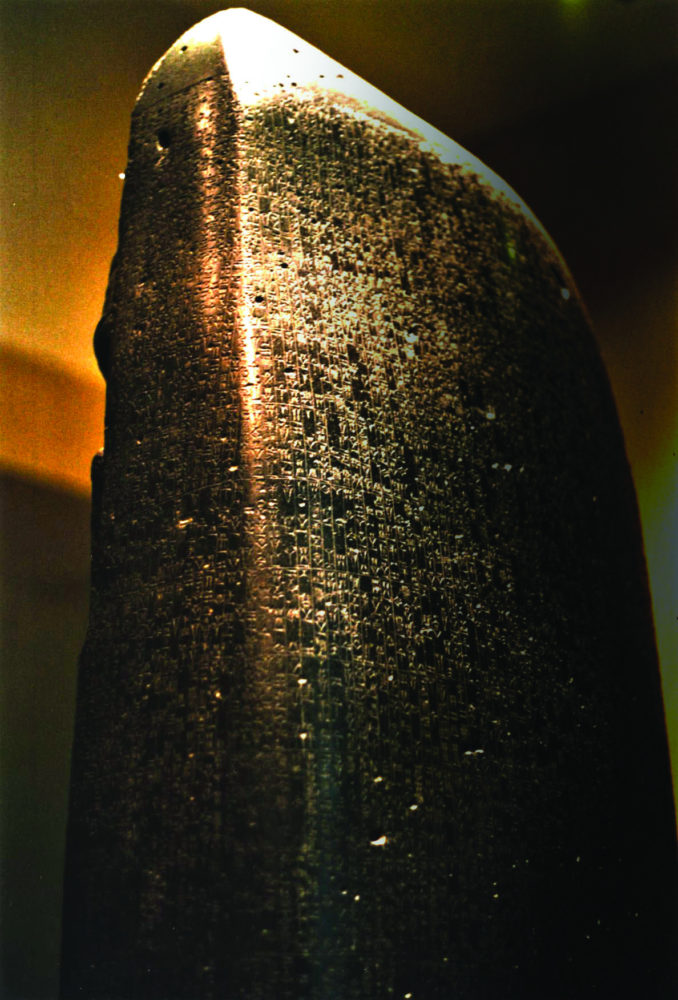 Reverse side of the stele containing Hammurabi’s Code. 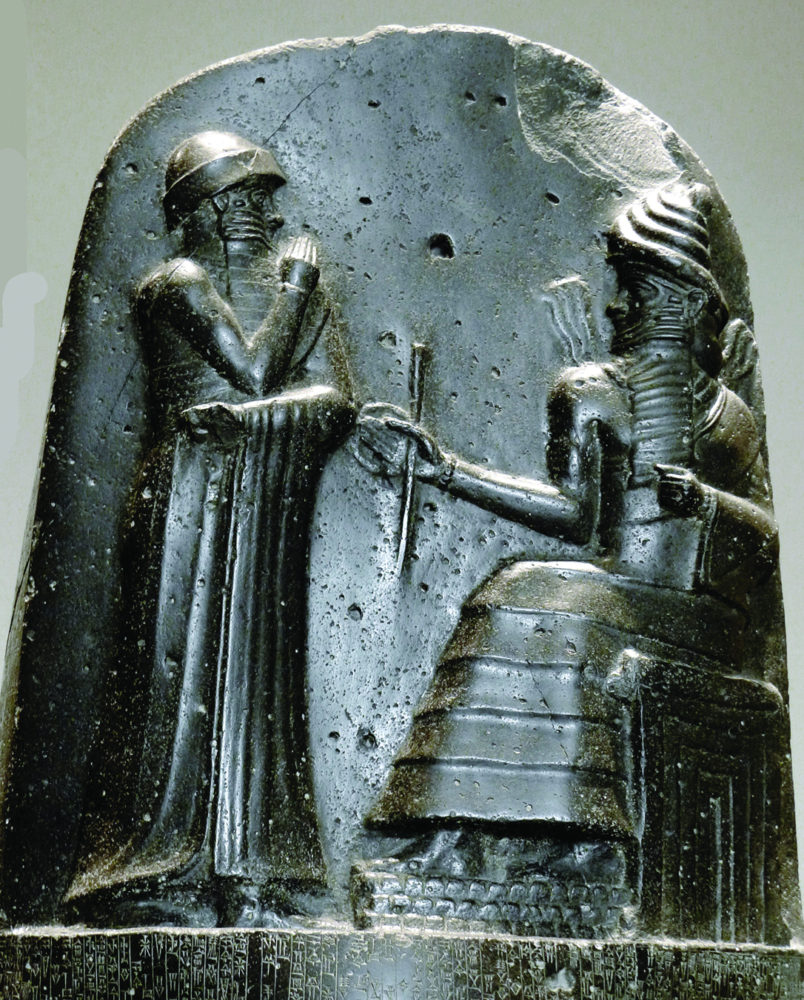 Relief sculpture on Hammurabi’s Code. One interpretation is that the sun god Shamash, seated on a temple-like throne, hands Hammurabi the rod and ring, symbols of kingly legal authority. 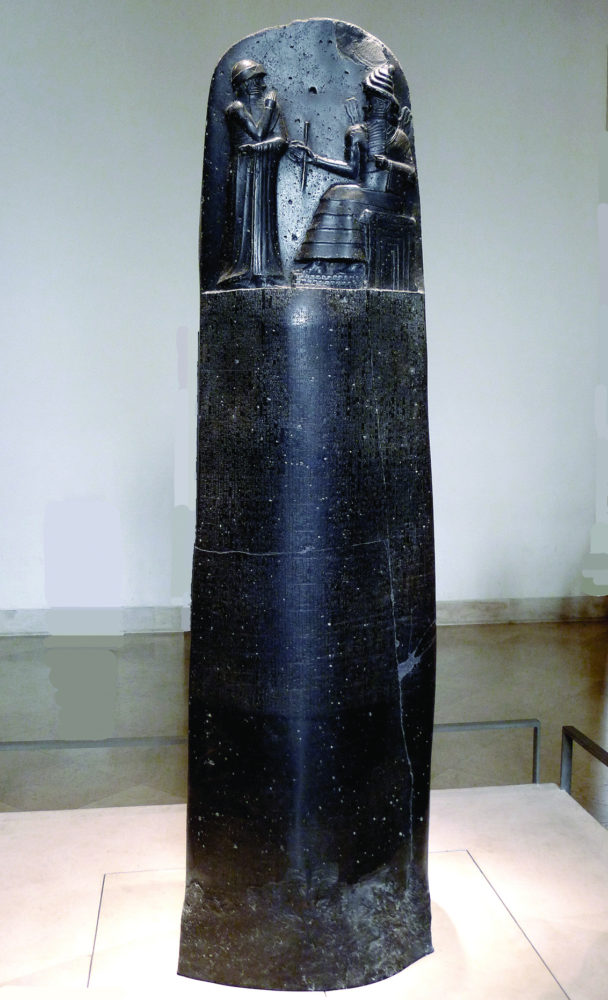 The 2.25-metre-high stele containing Hammurabi’s Code on display in the Louvre in Paris. Its prologue states he was divinely chosen to improve Babylonians’ welfare through his power, prudence, and arbitration skills as “the perfect one.” It cannot go unmentioned that Hammurabi also wedged in the assertion that he was “humble.”

What is the Rule of Law?

Hammurabi’s Code was an early and important step towards establishing the Rule of Law in a society. The Rule of Law is the belief that it is better to be ruled by laws than to be ruled by leaders who can act any way they like. For example, dictators often exercise absolute power without following any guidelines. If the law rules us, leaders cannot use their power as they please. Political leaders, police, and judges are subject to the same laws as everyone else. By establishing a code of laws, Hammurabi helped ensure that the actions of authorities were not arbitrary, but rather followed a set of rules. By making these rules public, everyone could know what they were.

For there to be the Rule of Law it is also necessary that society has peaceful and orderly ways to create and change laws. Guidelines must exist that can be understood and used by everyone. This idea about the Rule of Law is demonstrated in Canada’s political system today. Collectively as a society, Canadians are able to control how laws are made. This is done through democratic processes in parliaments, legislatures, and municipal and band councils. 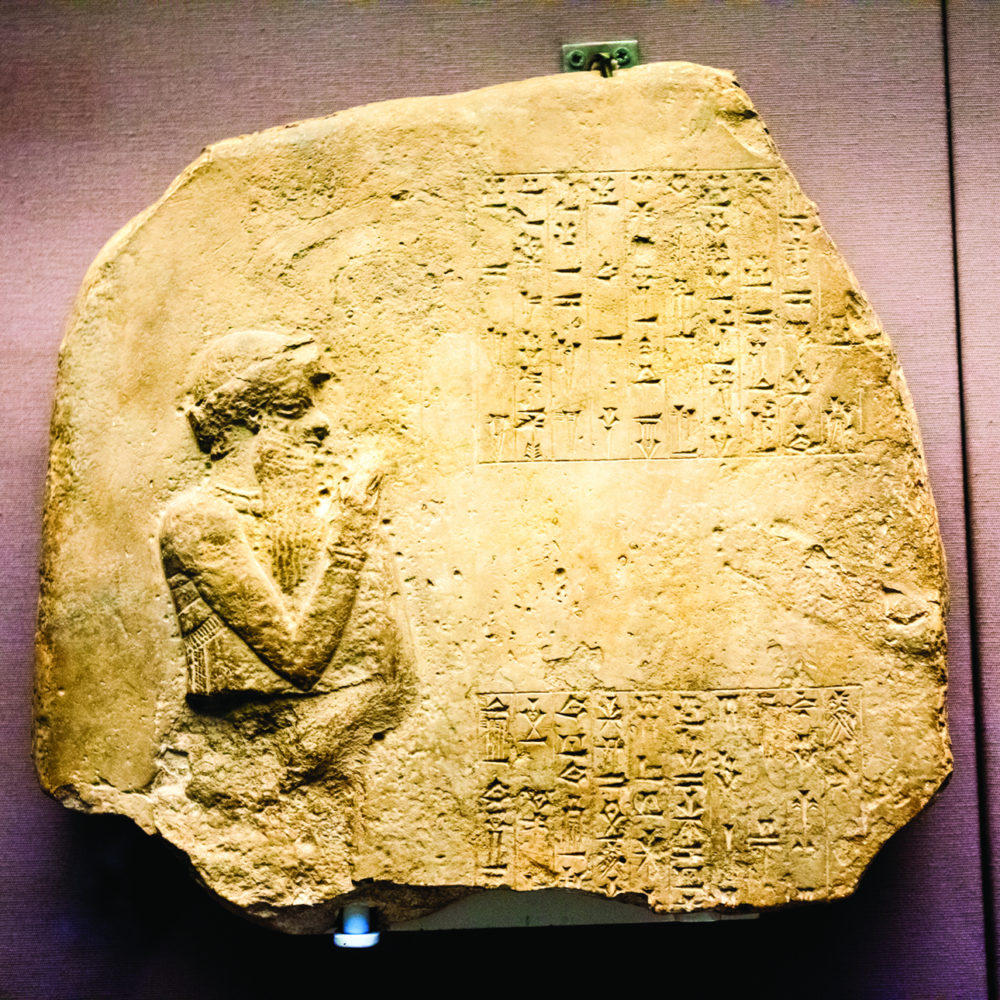 Tablet with a duplication of Hammurabi’s Code on display at the British Museum in London.