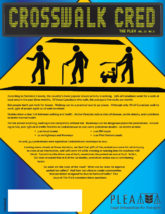 According to Statistics Canada, the country’s most-popular leisure activity is walking. 70% of Canadians went for a walk at least once in the past three months. Of those Canadians who walk, the average is five walks per month.

But people don’t just walk for leisure. Walking can be a practical way to go places. Although only 7% of Canadians walk to work, 33% of people aged 10-16 walk to school.

Yet like almost anything, walking is not completely without risk. Roadways can be dangerous places for pedestrians. According to SGI, over 13% of all traffic fatalities in Saskatchewan in 2011 were pedestrian deaths—20 deaths in total:

As well, 342 pedestrians were injured on Saskatchewan roadways in 2011.

So what are the rules of the road? What can be done to improve pedestrian safety? And how can citizens create communities that are better designed for diverse forms of traffic? This issue of The PLEA considers these questions.