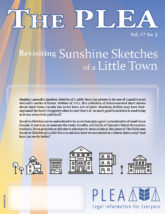 When Europeans arrived in North America, they considered Indigenous peoples to be “savages” and inferior civilisations. To Europeans, their land was virtually empty or “terra nullius,” an idea used in international law to justify taking over land. The racist view of a few “savages” scattered about an empty land was the basis of the European approach to Indigenous peoples for hundreds of years: it was the accepted view in respectable intellectual circles, it was upheld in court cases, and it was assumed to be the truth by the vast majority of Europeans.

Like far too many Canadians of the past, Stephen Leacock held many of these views. Sunshine Sketches makes this evident in the passage “You get that impression simply because the judge howled like an Algonquin Indian when he saw the sprinkler running on the lawn.” As well, Leacock’s 1914 book The Dawn of Canadian History referred to Indigenous people as “savages,” and repeated the claim that there were only 20,000 Indigenous people across Canada at the time of contact. With the big picture, Leacock was wrong. Conversely, Anderson’s Remembering Leacock shares stories of him being kind to Indigenous people. Ralph Curry’s Leacock biography mentions that his mother Agnes—a guiding force in Leacock’s life—was highly regarded by the people of the Chippewas of Georgina Island First Nation. And Leacock was friends with Jake Gaudaur, the Métis Nation of Ontario world champion rower who Leacock lionised in his essay “Bass Fishing on Lake Simcoe.”

Nevertheless, Leacock’s kindness in person does not negate his problematic views. As historian Margaret MacMillan says, “history reminds us that deeply held beliefs can often be deeply wrong, and they often can be held by very clever, very powerful people who have sources of all sorts of information and they still get it wrong.” For MacMillan, this reality can help give us all a sense of humility as we look to the past, the present, and the future.

One way society is now looking to the past, present, and future is with the help of the Truth and Reconciliation Commission. They tell us:

reconciliation is about establishing and maintaining a mutually respectful relationship between Aboriginal and non-Aboriginal peoples in this country. In order for that to happen, there has to be awareness of the past, acknowledgement of the harm that has been inflicted, atonement for the causes, and action to change behaviour.

Passages such as Judge Pepperleigh’s description—possibly referring to a war cry given that the Algonquins were embroiled in many famous wars—perpetuated false views of Indigenous people in general and Algonquin people in particular.

Algonquin is an umbrella term for a cultural and linguistic group of Indigenous peoples that include the Mississauga, Ojibwe, Cree, Abenaki, Micmac, Malecite, Montagnais, and Blackfoot. They have lived for at least 8,500 years on the land commonly known today as southern Quebec and eastern Ontario. Algonquin was considered a root language for many Indigenous languages. Learning it was key knowledge for fur traders pressing deeper into North America. Far from being a cry of anger, Algonquin language was important for building relationships between Europeans and Indigenous people.