The PLEA: Cats and the Law

Back to Newsletter Archive
Published January 2021 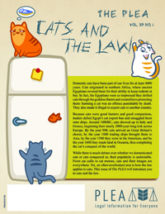 The PLEA: Cats and the Law

Domestic cats have been part of our lives for at least 4000 years. Cats originated in northern Africa, where ancient Egyptians revered them for their ability to keep rodents at bay. In fact, the Egyptians were so impressed they deified cats through the goddess Bastet and created laws protecting them: harming a cat was an offence punishable by death. They also made it illegal to export cats to another country.

Because cats were good hunters and good companions, traders defied Egypt’s cat export ban and smuggled them onto ships. Around 1000BC, cats showed up in Italy and Greece, beginning their nearly 2000-year-long trek across Europe. By the year 900, cats arrived on Great Britain’s shores, by the year 1000 trading ships brought them to Asia, by the year 1500 they were in the Americas, and by the year 1600 they made land in Oceania, thus completing the cat’s conquest of the world.

While there is much debate over whether we domesticated cats or cats conquered us, their popularity is undeniable. From cat cafés to cat memes, cats and their images are everywhere. Yet, an often-overlooked area is how the law applies to cats. This issue of The PLEA will introduce you to cats and the law.

Every student handout in our digital learning resources is a downloadable PDF. Ideal for posting, sharing, or printing!