Back to Newsletter Archive
Published June 2022 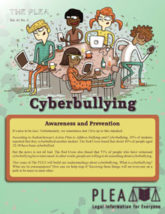 What can you learn from these two cases?

A 15-year-old girl found out that someone had posted a fake Facebook profile of her. The profile used her picture and a slightly modified version of her name. The picture was accompanied by unflattering comments about the girl, including sexual comments.

The Supreme Court ruled that the internet service provider must reveal who created the fake profile. There was no other way to identify the profile’s creator. The case showed that bullies cannot remain anonymous on the internet.

A 16-year-old boyfriend asked his 14-year-old girlfriend to take intimate photos of herself. Without her permission, he posted 10 photos to a pornographic website. People were invited to rate and comment on the photos. They were viewed 1,300 times over two years.

This caused the girlfriend extreme anxiety and depression. Her privacy was violated, and people were given the opportunity to humiliate her by making comments on the website.

The boyfriend pled guilty to criminal harassment. He cooperated with the police and attended counselling to take responsibility for his actions. The judge put him on probation—meaning he was under supervision—for a year. In addition, he served a short time in prison while awaiting his sentence. He was also ordered to not communicate with his former girlfriend. The case reinforced that “sexting” is a serious crime with long-term consequences for everyone.