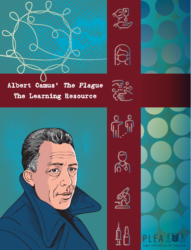 "The only means of fighting a plague is -- common decency."

During and just after World War II, Albert Camus wrote The Plague. The Plague tells a tale of a contagion descending upon the Algerian city of Oran. Camus, then a rising star in French artistic and intellectual circles, used the book to explore the role of the state and the role of the citizen in a public health crisis. The story weaves through such topics as the functions of elected authorities and public officials, the impacts of restricted movement, the scourge of profiteering, the shame of prison conditions, the need for personal responsibility, and the vitality of collective solidarity.

The Plague was an immediate hit in France. This success was not due to a sudden French interest in bacterial disease. Rather, Camus biographer Maria Ardizio tells us that its success was driven in part by a French desire for novels that mythologised France’s tumultuous experience in World War II.* The battle against plague in Oran, after all, is not just a battle against disease. It is an allegory for the battle against fascist and authoritarian government in France. When Hitler’s armies marched into France in 1940, the French republic collapsed. In its place came a new French government called Vichy. Vichy, while independent of Germany, collaborated with Hitler and the Nazis.

Convergent circumstances in the world today remind us of the perennial relevancy of The Plague. Alongside the onset of COVID-19, we are witnessing the rising fortunes of authoritarian forces. In 2020, the Economist Intelligence Unit—a United Kingdom-based research organisation—reported yet another year of global decline for democracy. The western world has not returned to the depths of World War II fascism, but powerful forces are pushing against liberal democracy and its embrace of minority rights and the rule of law.

With this understanding, PLEA created Albert Camus’ The Plague: The Learning Resource. Designed for use with Saskatchewan’s English Language Arts B30 curriculum, this resource is geared towards Unit II, The Social Experience:

Every person is part of the larger society and is shaped by and responsible to it. Historically and currently, people have strived to create a better society that attends to the individual as well as to the collective good. Human endeavour, history, and literature attest to the ongoing challenge of achieving balance between individual and societal concerns, rights, and responsibilities; between individual aspirations and societal needs; between personal ambition and the common good; between individual beliefs and societal values. This ongoing challenge manifests itself in conformity and rebellion, causes and crusades. In this unit, students examine, critique, and interrogate the society in in which they would like to live.*

This resource charts a path through The Plague that will help teachers fulfill this approach.

Using This Resource
Albert Camus’ The Plague: The Learning Resource contains tools teachers have come to expect for exploring a novel with their students. Pre-reading activities lay the groundwork for understanding the novel, chapter questions provide opportunities to identify and discuss the book’s events and themes, and post-reading questions help set students on their own unique paths for deeper inquiry.

As well, this resource includes informational handouts that give meaningful contexts to the novel. Handouts fit into one of four broad themes:

While any handout could function as a stand-alone reading, their design keeps with Jerome Bruner’s concept of instructional scaffolding. As the resource progresses, ideas are built upon each other. Teachers may wish to use these handouts with students, use them as their own background reading, or any combination of the two approaches.

Albert Camus’ The Plague: The Learning Resource begins by establishing understandings of literary techniques, health concepts, and some of Camus’ philosophies. Once these baselines are established, the resource gradually shifts its emphasis toward the historical contexts that form the novel’s allegory: the Nazi occupation of France, and how the French both collaborated with it and resisted it.

In addition, this resource features a handful of “Think Local” activities. These are more current, and more Saskatchewan-focussed. Their inclusion is designed to bring the novel and associated readings closer to home.

On the whole, as the curriculum asks, students will come away from their study of The Plague not just with a stronger understanding of the big ideas contained within the novel; they will also be better-equipped to examine, critique, and interrogate the society in which they live, and be better-able to consider the actions needed to create the kind of society in which they would like to live. Students will have contemplated the ideals of justice, the balance between individual rights with societal needs, the importance of human decency in building a society, and the power of literature to make us think about and act upon these ideas.

Of course, no single learning resource can be all-encompassing. Teachers are encouraged to use Albert Camus’ The Plague: The Learning Resource as one piece of an overall approach to The Plague. Teachers also are encouraged to adapt the information, questions, and activities in this resource to meet the unique circumstances of their students, classrooms, and communities.

As the professionals closest to the actual learning taking place in Saskatchewan classrooms, PLEA is always interested in hearing about your experiences with our learning resources. What works? What can we do better? What else do you need? Drop us a line.