From Dream to Reality: The Story of Treaty Land Entitlement 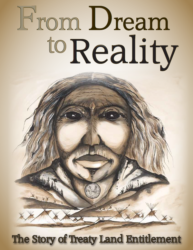 Saskatchewan Treaty Land Entitlement - How It All Began

First Nations are the original inhabitants of Canada. For thousands of years before people came from Europe or Britain and before anyone thought of this part of the world as Canada, First Nations occupied this land. From first contact the First Nations and those who later came to this land have had to find ways to live together. The Treaties played a pivotal role in providing a peaceful means for newcomers and First Nations to live in harmony, both historically and today.

The Treaties were of enormous benefit to the people of what would later become Saskatchewan and continue to be of benefit today as they allowed the peaceful settlement and use of First Nation lands. However, the British and later Canadian governments did not only have practical and policy reason for entering into Treaties with First Nations. They also had to consider their own laws that recognized the rights of the First Nations and accepted that the Treaties were a legitimate way of dealing with those rights.

The story of Saskatchewan Treaty Land Entitlement is the story of how people came together to find a way to fulfill this cornerstone obligation of the Treaties.

As discussed, land for the exclusive use of First Nations of what is now Saskatchewan was promised when the Treaties were first entered into. Specifically, the Treaties provided that the First Nations would receive a certain number of acres based on their population.

In order to accurately determine the populations, each First Nation had to be surveyed. However, historical research shows First Nations populations were undercounted when the reserves were initially surveyed. In many instances individuals who happened to be away fishing, hunting or even simply visiting a neighbouring Nation were not included in the population count. In other instances the Indian agents responsible simply did not accurately record the population. As an accurate population count was critical for ensuring that First Nations received all of the land they were entitled to under the Treaties, undercounting resulted in what would come to be known as the Treaty land debt.

The resulting Treaty land debt was not dealt with for many, many decades following the signing of the Treaties. During this time both the nature of the First Nations themselves and how land was used in Saskatchewan had changed dramatically. Because of these changes a number of issues had to be resolved before the Treaty land debt could be addressed in any meaningful way and the Treaty promises fulfilled.

One issue that needed to be resolved was how to determine the cut-off date for establishing First Nation populations in order to calculate how much land was still owed under the Treaty. Using the population as of the date of first survey left First Nations whose populations had grown significantly without adequate land, and was not in keeping with the spirit and intent of the Treaties that suggested that the Treaties should be interpreted as living documents capable of embracing changing circumstances. Using a later date, however, could be seen as arbitrary and could also result in inadequate compensation to First Nations whose populations had been seriously undercounted at the date of first survey but who had not seen rapid growth of their population in the following years.

Another issue was finding the land to fulfill the obligation of setting aside land for the exclusive use of First Nations. At the time of the signing of the Treaties much of the land in Saskatchewan was held by the federal government as Crown land. There were vast tracts of unoccupied Crown land that could be selected under Treaties. However, in the years since the first surveys much of the productive land had come to be owned by private individuals. The Crown land that was available was generally of poor quality and Crown land that was productive was often subject to third party interests because it was being used for things like community pastures.

From Dream to Reality