The PLEA: 70 Years of the Bomb

Back to Newsletter Archive
Published April 2021 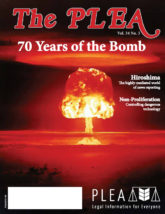 The PLEA: 70 Years of the Bomb

It has been seventy years since the invention of the nuclear bomb. As the most destructive physical force ever devised, it is significant to many people for many reasons. Understanding it can be done through the study of science, the study of the humanities, or the study of international law—just to name a few ways!

This issue of The PLEA will help build your understandings about the bomb. Largely focussed on the early years of nuclear weapons, it considers:

While suitable for most any reader, 70 Years of the Bomb has been written for use with the National Sovereignty and Collective Security unit of History 20 and the International Law unit of Law 30.