The PLEA: The Nazi Satire Project 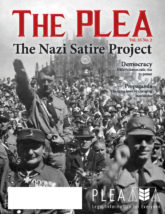 The PLEA: The Nazi Satire Project

Satire and the Manipulation of Public Opinion

The Nazi government wanted public support for its draconian laws. Satire was one way of building this support.

To create a homogenous Third Reich where all Germans shared the same values, Hitler and the Nazis needed to change German mentalities. One of their methods was propaganda. Propaganda is material that contains ideas or information meant to influence attitudes. Though usually biased or misleading, propaganda can also be based in some truth or perceived truth.

Even before the Nazi Party was the German government, they were creating propaganda to influence attitudes. In 1929, the party established a central propaganda mechanism that existed above local political control. It was headed by Joseph Goebbels. This party mechanism became a government ministry once the Nazis took power. The Ministry for People’s Enlightenment and Propaganda, as it was called, set about building a new society. As German propaganda expert Randall Bytwerk said, the Nazis wanted Germans to:

share almost unanimously a common worldview of religious proportions, what some today call hegemonic metanarrative, with little room for opposing versions of truth.6

Without doubt the ministry had its propagandistic successes, perhaps best exemplified by Leni Riefenstahl’s 1935 masterwork film Triumph of the Will, a profile of the Nazi party’s 1934 congress. The Nazis even commissioned their own blockbuster version of Titanic, which pegged the blame for the disaster on unrestrained British greed. Questionable, however, was the success of the ministry’s satire.

On the surface, there is not much that is funny about Nazi ideology. This is especially true given that in their quest to create a mythic and cultic rather than a rational public sphere, Nazis recognized a trait of satire that ancient societies recognized: its ability to kill.

In its earliest Arabic and Irish forms, satire acted as a fatal curse against enemies. This belief meant that the poets of these societies had a specific role in war: they would compose satire that harnessed mythical and deadly forces, and unleash these forces upon their enemies.7 Satirists were viewed much like warriors, because these societies believed that satire—quite literally—could kill.

The Nazis largely held the same view. Their satire primarily targeted enemies and critics: the people they began killing and banishing from the country once they took power. As a Nazi critic wrote in 1932, satire was to be praised because “laughter kills.”8 Given the power of satire, it is little wonder that satire was the only form of humour that the Nazi propaganda machine had developed when the party took power.

Satire and the State

Once the Nazis had absolute control of the state, governmental work began in earnest to re-engineer the public sphere from the top-down. Their goal was a uniform society where the Volksgemeinshaft subscribed to Nazi ideals.

Every public statement from Goebbels’ press organs at the Ministry of People’s Enlightenment and Propaganda was viewed as the “direct will of the National Socialist state.”9 This included Die Brennessel. As an official party and state publication, it reflected the government line and was considered “the leading light” of Nazi Germany’s satire.10

Interestingly though, as Nazi Germany began to pass laws that discriminated against Jews, the antisemitism in Die Brennessel slightly mellowed. Randall Bytwerk accounted for this as a strategic move meant to minimize sympathy for Jews. However, vitriolic antisemitism still appeared in magazines not published by the state. Most notorious was the antisemitic weekly Der Stürmer run by Hitler’s friend Julius Streicher. 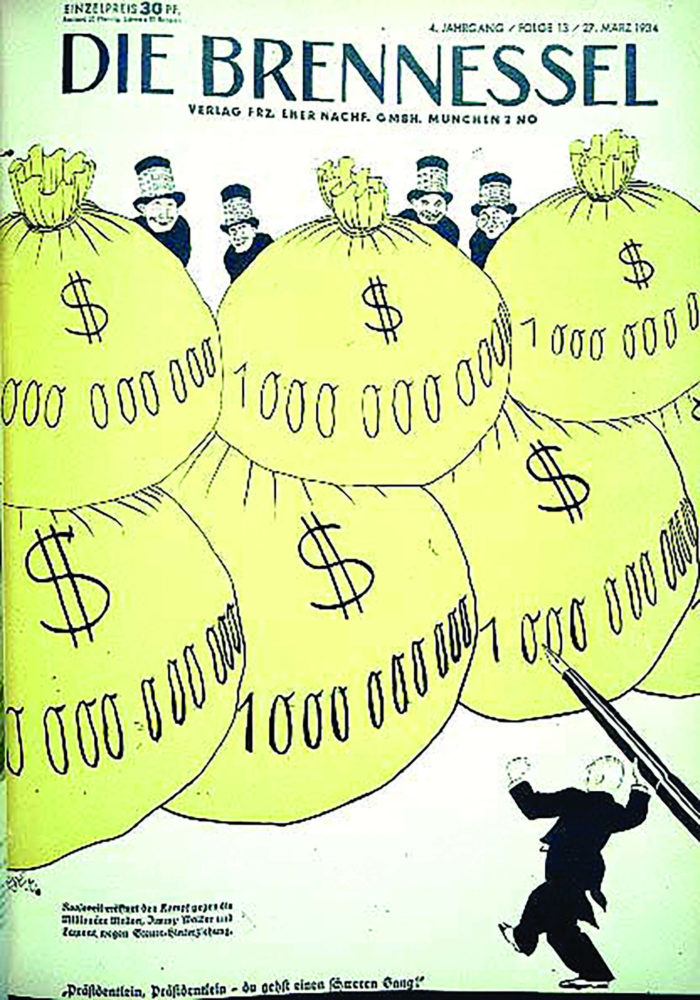 Satire theorists share one near-universal agreement about defining satire: it is incredibly difficult to define. Satire theorist Robert C. Elliott perhaps said it best when he described satire as “notoriously a slippery term.”

Even though he believed it was difficult to define satire, Elliott did ascribe an “avowed purpose” to satirists. He said they:

expose some aspect of human behavior which seems to him foolish or vicious, demonstrate clinically that the behavior in question is ridiculous or wicked or repulsive, and try to stimulate in his reader (or in Roman times, his listener) the appropriate negative response which prepares the way to positive action.11

Horatian satire is rooted in the writing of Horace (65 - 8 BC). For him, satire was mild mockery and playful wit delivered in plain language. Horace did not want to cause pain, but did want to resolve serious issues in society. Juvenal (c. 1st century - 2nd century) felt differently. He was enraged by viciousness and corruption in Rome, so Juvenalian satire was meant to bring terror and destruction to its targets. A third less discussed form is Menippean. Based in the philosophy of 3rd century cynic Menippus, it was a humorous attack on mental attitudes more so than institutions. Menippean satire presents people as mouthpieces of the ideas they represent.