Our Government Our Election 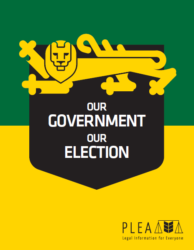 The social studies classroom is a public square. Young citizens assemble to understand society as it exists, debate the ways society should change, and propose how to accomplish change. With this understanding, PLEA has created the third edition of Our Government, Our Election to build civic-mindedness.

Our Government, Our Election explores Saskatchewan’s government, politics, and the electoral process. Each of its three sections has a specific focus:

SECTION ONE: THE PURPOSE OF GOVERNMENT
Section One introduces the foundational purpose of government in society. It considers:

SECTION TWO: THE MECHANICS OF GOVERNMENT
Section Two explores how laws are made and how governments can be held to account. It considers:

SECTION THREE: THE ELECTION OF GOVERNMENT
Section Three explains how we elect our governments. It considers:

These lessons are not meant to be prescriptive or holistic. Teachers are the professionals best-situated to facilitate student learning. Thus, the material in Our Government, Our Election is only meant to act as a suggested starting point. There are many other excellent resources on governance and elections, some of which are referenced in this resource’s lessons.

Feedback on this or any other PLEA learning resource is always appreciated. Drop us a line.

Our Government Our Election